The World Health Organization (WHO) follows the Nordic countries in repealing sexual minorities with consenting practices from the International Classification of Diseases in the new ICD-11 revision.

RESEARCH AND HEALTH POLITICS: “Due to advances in research and clinical practice, major shifts in social attitudes and in relevant policies, and human rights standards”, the World Health Organization June 18, 2018, removes Fetishism, Transvestic Fetishism and Sadomasochism as psychiatric diagnoses. 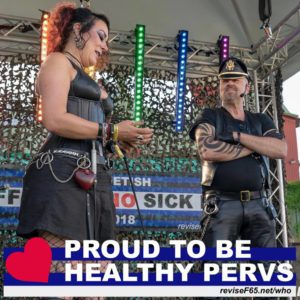 Helene Delilah and Svein Skeid roleplaying getting off the WHO sick list at the stage during Europride in Stockholm August 4, 2018.

PRIVATE BEHAVIOUR: ”From WHO’s perspective, there is an important distinction between conditions that are relevant to public health and indicate the need for health services versus those that are simply descriptions of private behaviour without appreciable public health impact and for which treatment is neither indicated nor sought.”

– This is a milestone in the work for human rights and sexual liberation, says Ingvild Endestad, leader of FRI, the Norwegian LGBT organisation for sexual and gender diversity. Consensual sexuality has nothing to do with psychiatry. This is an immensely important recognition of the sexual diversity among us, she says. 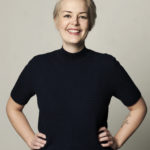 Endestad gives Svein Skeid and FRI’s Revise F65 committee much of the credit for the victory. Human rights standards are part of the professional basis for the reform and the recommendations from Revise F65 are entirely taken into account.

Susan Wright in the American organization NCSF (National Coalition for Sexual Freedom) reports July 12, 2018 about a child custody case in Belgium. The woman was so glad Revise F65 did this work so she has a defense.

“… this is an excellent posting. It’s well timed with my discovery of #Gear365. In a short space of time the international encouragement to get out and be who I am has done what years and years of angst and stress failed to achieve. Thanks guys, a huge thanks!

”This is absolutely tremendous news, Svein! Thanks for all your efforts to bring our amazing community out of the WHO biggot list once and for all. You’re a true hero!”

– Denmark, which removed sadomasochism from its national list of diseases in 1995, was our big source of inspiration, says Svein Skeid, the leader of Revise F65. Skeid and psychologist Odd Reiersøl started a ground-breaking cooperation across national borders and sexual orientations where dozens of activists, organizations and professionals contributed.

– It is very important for these individuals that society recognizes them as equal citizens, expressed the director of the health department, Lars-Erik Holm, to the newspaper Dagens Nyheter November 11th 2008, when the three diagnoses were abolished in Sweden.

– I heard the news on a Norwegian radio station and understood that an equivalent removal could also be within reach in Norway, Skeid tells.

– I had recently been in Stockholm during Europride and given the organization RFSU our arguments, he says. I became very touched by the Director General’s statement: ”The health department wants to emphasize that these behaviors are neither illnesses nor perversions.” 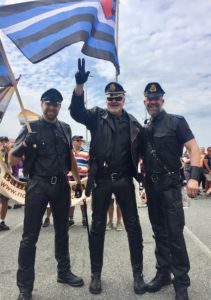 – Within 6 years the diagnoses were repealed in all the Nordic countries, patterned after the Norwegian model and the pioneering work of Revise F65, psychologist Odd Reiersøl tells. – Thus the pressure increased on The World Health Organisation to follow suit. After a while Revise F65 achieved direct contact with the authorities in Geneva.

– In 2009 we received a commission from Senior Project Officer Dr. Geoffrey Reed, who has been the leader of WHO’s Working Group on Sexual Disorders and Sexual Health. This resulted in a 3 page report documenting that the diagnoses in question are outdated, non scientific, and stigmatizing, says Reiersøl.

Dr. Reed asked for additional evidence, and November 11, 2011 ReviseF65 delivered a 50 page summary of research based knowledge, documenting that sadomasochism and sexual violence are two different phenomena. Among other things, the fetish/bdsm population has equivalent scores with the rest of the population regarding democratic values such as empathy, responsibility and gender equality.

Already the next day Dr. Reed gave feedback about perfect timing since the revision committee soon would have their very first meeting discussing the reports.

The revision is scheduled to be finally adopted in 2019 and the manual can be employed from January 1, 2022. 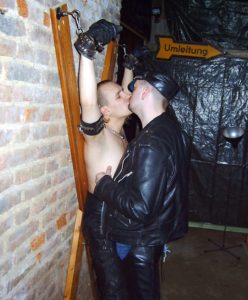 * Fetishism is a sexuality involving specific objects, actions or ideas, which give sexual exitement and pleasure.

* The right to have control over one’s own sexuality and the right to privacy have been fundamental in the work to repeal homosexuality and subsequently fetishism and sadomasochism as mentally illnesses.

Ingvild Endestad is leader of the LGBT-organisation FRI, the Norwegian organisation for sexual and gender diversity. E-mail: [email protected] Phone: +47 97 56 22 95.

Odd Reiersøl is an experienced Norwegian psychologist for 30 years working with adults, couples and groups and educating other professionals. E-mail: [email protected] Mobile: +47 94 03 46 88.

EuroPride 2003, held for the first time in the UK, has been declared the best ever, despite attracting far fewer than the 1.2m who descended on Cologne in Germany last year.

Robert Kastl, President of EPOA, the founding organisation for EuroPride, was glowing about Manchester’s achievement. “This EuroPride has been fantastic, the best EuroPride so far. The Parade was the most colourful and artistic I have ever seen in Great Britain.”

Visitors from all over Europe received a warm welcome with the Rainbow Flag flying from the top of the Town Hall (picture above), and the Greater Manchester Police distributing a very welcoming Europride Special magazine (picture left) all over the gay village during the Big Weekend.

– What a difference today from 15 years ago when I first came to Manchester and marched through the streets against Section 28, said Actor Sir Ian McKellen according to several gay newspapers.

EuroPride started on the 15th August but one of the highlights was when the world’s longest Rainbow Flag stretching a quarter of a mile in length and weighing more than half a tonne was carried in the Key 103 EuroPride Parade on Bank Holiday Saturday August 23rd.